Login / Register
‹ Back to the shop 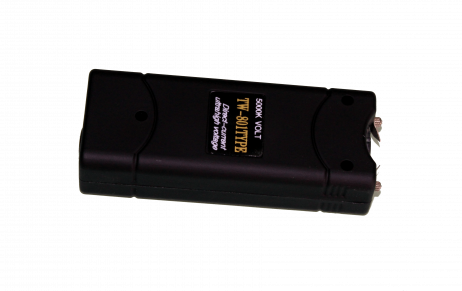 •Individually packaged, ideal for gifts and even reselling

•No license or permits required

Mini Taser Li’l Guy 5000 volts Stun Gun with flashlight and FREE Nylon Holster. This stun gun is small and compact and is easy to conceal in your hand. Model 801 is small enough to conceal carry in your bag or pocket yet versatile enough to be used in a variety of different situations.

A Stun Gun is an electrical self-defense device that uses high voltage to stop an attacker. Touching a person with the prongs on the Stun Gun quickly immobilizes the attacker. However, because the amperage is very low, no serious or permanent injury is inflicted. Stun Guns are designed to key into the nervous system. They dump their energy into the muscles at a different frequency than the pulse waves emanating from the brain. The pulse waves coming from the brain and those from the stun gun collide at the nerve synapse’ which is a type of complex processing switch adjacent to each muscle group. The resulting energy collision makes it difficult for an attacker to move and function. This causes disorientation and loss of balance and leaves the attacker in a passive and confused condition for several minutes. Still, stun guns have no significant effect on the heart and other organs. As a general rule, a one-half second contact from a stun gun will repel and startle the attacker, giving some pain and muscle contraction. One to two seconds will cause muscle spasms and a dazed mental state. Over three seconds will cause loss of balance and muscle control, mental confusion and disorientation. However, don’t think about how many seconds you should hold the Stun Gun to your attacker. Think about it this way. Throw out what the books say and the online information you have read about Stun Guns. You should hold your stun gun to the assailant until they drop and you can get away and call the police, whether that may be one second or six seconds. The electrical shock that emits from the stunning device will not pass from the person being stunned to the person doing the stunning. The effect is localized only in the affected area and does not pass through the body.

Don’t let the name Mini Taser Li’l Guy fool you. It has a beast inside just waiting to be released. Just press the shock button and the Lil Guy thrashes 5000 volts out of the metal probes. Please charge your taser for at least 2 hours every week for optimal battery performance. It contains a 900mAh Li-ion battery which is rechargeable. Charging cable is included in the box. Charging brick is built into the body of the taser for ease of operation.

The safety switch is off when in the down position, middle position is the super bright LED flashlight, and in the up position the shock is turned on once the trigger is pressed.

There are no reviews yet.

Only logged in customers who have purchased this product may write a review.

The knuckles were of good quality.Recommended

posted in Knuckle Dusters
from khayyamgoodone

Top quality product with cash on delivery same as in pictures.good services...

posted in Knuckle Dusters
from Farrukh

In association with Brandspeak Pakistan